Got a hot tip about the Double Dragon series? Post it here!

Geez, is that even real? After ALL THESE YEARS...

Yup. IT IS REAL after all.
Out of, [censored] nowhere.

With the guys on board, who were behind original Double Dragon arcade - Yoshihisa Kishimoto (AT LAST!), Takaomi Kaneko, Koji Ogata, Kei Oyama and Kazunaka Yamane (YEAH!).
For PS4 & PC (on Steam), 30-th of January, 2017.
https://www.youtube.com/watch?v=y0f8RV4Q8t4
Top

It is absolutely real! Raced to the board to post about this as soon as I heard. Based on the video, it looks like this will be an online release. Did they mention if it will be released a as a physical disc? Bless Arc System Works!!!
May you live hapilly forever...
Top

I'm honestly torn about this. On the one hand, I'm glad members of the original staff are back and they're using NES DD2 as their base. On the other hand though, I was expecting fresh sprites, and the entire aesthetic looks lazily done, which is inexcusable when Shovel Knight set the template on doing the retro look right.

I'm sure it'll turn out to be a solid game, but I wish it could be so much more. With ArcSys at the helm I was hoping they could have put in the effort like they did for Hard Corps. As long as it stays true to its roots and washes away the stench of Neon, I'll be content.
Top

Also torn on this. When I saw someone post about a DD4 trailer on social media, I thought it was a fan project at first.

My gut reaction is, I really don't like curated fake NES era graphics. It's what they did with the new River City Ransom/Kunnio games, where they have the NES sprites but then these 16-bit backgrounds. Much would rather have SNES styled character and background graphics.

I'm glad its not yet another Double Dragon 1 remix/remake/reboot, or a 3d game(the two DD 3d games from the trailers didnt appeal to me)
but given how beautiful Contra 4 looked, "DDIV" looks like any run of the mill fan game. I do love the colors of DD2 for the NES, and am glad NES DD3 exists to correct
the horrible DD3 arcade...but how much more effort would it have been to have made Game Boy Advance/SNES graphics?

Heck my dream would be a proper sequel done in the DD1/DD2 arcade style. The DD franchise seems cursed in that almost every iteration misses the mark.
SDD looked great and colorful, but was so damn slow and awkward to play. "DDV" should be forgotten. I dont know what was up with the Double Dragon/Battletoad games.
I LOVED the look of the Neo Geo Double Dragon but wish it was a side scroller. DDA for the GBA in 2003 was great, tho it suffered from muddy graphics. I still fire up DD for iphone now and then.

Tho I will admit, I was surprised to see any new DD game that wasn't a sequel. Seeing a direct sequel to the "Tradewest" NES style trilogy I guess is novel.
http://www.youtube.com/user/badicalpower/videos
(my adult swimlike animated series)
Top

Given Kishimoto's and the original "Dream Team"'s involvement, I'm feeling very optimistic. Even if the mechanics and graphics of the game are decidely rooted in the 8 bit games, I'm hopeful the game will have innovative gameplay and a story which is a true continuation of the 8-bit trilogy. Also, even if they set out to make this game as bad as possible, it would already be better than Wanderer.
May you live hapilly forever...
Top

Yeah, I had a similar reaction. It looks more like a rom hack than a true Double Dragon 4. I'm not against 8-bit style graphics, but I didn't expect them to simply re-use Double Dragon II NES sprites. I still want the game though.

Anyway, I posted the update on the website. I actually was locked out of my own site and had to recover the info from Kontek! Been a while.

Oh yeah, and hi everyone. I know I've been absent for a long time.
Top

The original team is behind it? Damn.

Well I will say, these promo graphics do have me excited The mention of the long dead Technos is a nice touch. I like how the Technos boxes were kept in the DD iphone game. Technos was
just such a cool company name.

I personally didn't like DD3 for the NES. The colorful neon cyberpunk color palette and creative vibe of the NES DD2 was gone in favor
of a very brown, impossibly hard game with DD3...as much as I consider it actual DD canon unlike the arcade and genesis DD3.

I remember picking up the Nintendo Power Pocket magazine that came free with seeing The Wizard movie in the 1989, and marveling at the gorgeous
colors of DD2 previewed, as much as I was in love with the DD2 arcade game. To me it's the closest to Genesis 16-bit colors I've seen on the NES
next to Batman 2 on the NES.

The 11 year old me who loved Strider, DD2 and Ninja Gaiden on the NES is definitely excited about "DD4"...I just hope Arc Systems has a nice 16-bit looking "DD5" planned 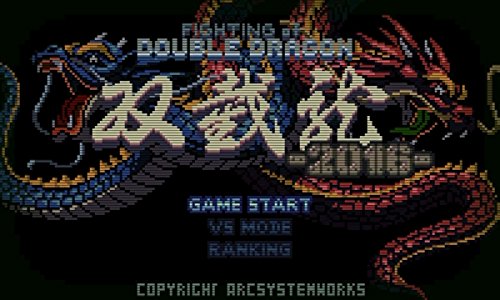 You can check out more details here:

Like some of you I am pretty torn on this game. Obviously I am happy that we have a new Double Dragon game and a sequel non-the less. Wish it would have taken place after Super Double Dragon though. I guess I will break it down into what I love and hate about it.

What I am disappointed about:

I guess like some of you I am very disappointed in the graphic presentation. I guess due to me played a lot of the fan games, this look more like another port. Basically the NES DDII graphics with a few added features. I guess with Arc systems producing products like BlazBlue and Guilty Gear, I expected more quality especially with a name such as Double Dragon. I guess I was hoping for a 2D game with BlazBlue-like graphics and awesome beat em up game play. Or at least a better looking game. It's hard to fall completely in love with the game when we saw better looking sprites like DD IOS for instance. Even improved graphics with those would have been absolutely amazing.

I am going to buy it and I probably will love it, but it just feels a little disappointing for some reason. I actually played DD2 on the Classic NES the other day so I guess I don't feel that next level from this game. Only time will tell. I hope I am wrong about my disappointments. I just don't want the franchise to be forgotten and would love for the new generation to enjoy it as well.
Top
Post Reply
31 posts