The discussion area for "the greatest martial arts series ever."
https://doubledragon.kontek.net/forums/

My favorite quote of the article " The idea of these games being in the hands of a company known for its gorgeous 2D graphics and incredible combat mechanics is super-exciting. While there’s no word yet on what they’re actually planning to do, the possibilities are incredible."

Some of us have been saying that Arc should be making beautiful 2d DD games. Despite being an enduring franchise, let's be honest...has Double Dragon received a proper
game since 1989's NES DD 2? DD3 was crap at arcades. SDD for SNES while looking nice, had a very slow clunky play mechanic and skinny tiny characters.
I liked the look of Neo Geo DD but it had little to do with DD itself and wasnt a side scroller. The movie was absolutely dreadful. And while DDA for the GBA had some cool additional new levels,
the game was plagued with a dark muddle color palette. Finally, DDi for the iphone and android I felt was great and felt like a spiritual sequel to DDA, but once
again it was a remake/remix and not a proper DD sequel. The 2d DD Neon and DD2 3D remake just looked terrible so I never played them.

Would love to finally see a proper brand new DD side scrolling sequel by the Arc lads.

by Play2win
This is certainly exciting news. The engines work well- but I hope some of the original Technos developers will assist in the new games' development to ensure they keep that unique DD feel.

by Billy Lee
This is major news and possibly the best news I have heard in a while. I am a fan of Blazeblu and Guilty Gear. Their fighters are pretty good and filled with a lot of great and interesting characters. As everyone mentioned, there games have beautiful 2D graphics which is ideal for most Double Dragon fans. Being that I am a huge fan of anime, I personally get a chance to see Double Dragon in a more anime style which I feel would do the game a lot of justice. If Arc decides to create a Double Dragon game, regardless of whether it is a beat em up of one on one fighter I except some major changes. However because of their reputation, I think it would be more welcome than any other company that has remade Double Dragon before.

Well with this happy news, just to have some fun, I could see Double Dragon looking something like this:


SETTINGS AND BACKGROUND When I think of the past Double Dragon games, I think of an industrial city, followed by a forest area, and ended with a kind of place/castle-like area. I can actually see Arc implementing that with their own personal touch. The city will seem a little more colorful, but industrious. The forest will seem just a little more dirty and rustic, but Willy's fortress will look completely extravagant. I think this will be a great touch to the franchise.

CHARACTERS: In Blazeblu/Guilty Gear fashion I expect that their Double Dragon game will feature a very vibrant cast of characters. There is going to some major change to the character; however, unlike Blazeblu and GG, I think it will look a little more modern. Still, don't be surprised if you see an extreme outfit change beyond even Rage of the Dragons. I could see some of our favorite characters looking like this:

BILLY LEE: I expect Billy Lee to look more like your typical anime hero (Left Picture). Possibly younger (Early 20s) with a quiet and stern demeanor like he had in past games/shows. As I mentioned, I think the look will be a little more modern so I somewhat expect Billy to dress more like the picture on his right with the button up being replaced by a plain white t-shirt. JIMMY LEE I expect Jimmy to have a similar build to Billy. Between the two he should be the more darker, vigilante-type character. As far as the Dragons relationship, it may be similar to Rage of the Dragons especially if it is another fighting game. Like Billy, I expect Jimmy to look what-what like the character on the far left. 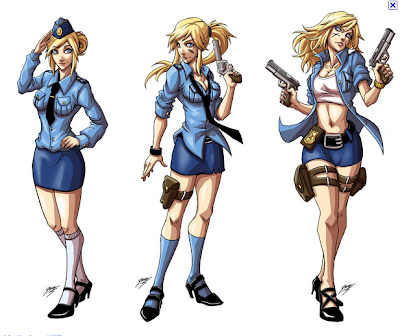 MARION KELLY/MARTIN: Odds are with this new day and age, Marion's damsel in distress days are over. Regardless, if they do a beat em up and/or a fighter, she may become playable. I expect Arc to give a officer-like persona once again. If she is going to be a damsel in distress again, odds are it will probably be in a beat em up. If it is a fighter, I guarantee she will be a playable character.

ABOBO: So I image Abobo being a huge muscular character with a lot of size and power.

by mechapop
Oh man, yeah a Double Dragon game in that style would blow my mind. Closest we've gotten I think was the Game Boy Advance game Gekido, as far as anime-ish side scroller beatemup.
(Then again I liked PS1 Gekido and Fighting Force, polygon 3d wise)

I'm actually a fan of Neo Geo Double Dragon 1995, but for some reason couldnt get into the DD knock-off vs fighter Rage of the Dragons.

by Billy Lee
I liked both Double Dragon and Rage of the Dragons on Neo Geo. I felt both were pretty good. Still I am really excited to see what they have planned. I think that no matter what they do with it it will be an amazing game. Finally a company that can give Double Dragon some real life.

by RenegadeDragon
Yes hopefully we will get what we want... I don't know why way forward dropped the ball on double dragon? they make such good remakes, contra 4 was great and captured the essence of the original contra. They even made a batman beat em up for wii and I thought that was good as well but the whole neon approach was just stupid as hell it felt more of like a joke to me then a real effort too make double dragon. The beat em up genre needs to be perfected for the new generation of gaming. I don't care if it stays 2d. If it ain't broke don't try to fix it. I have faith in arc systems to bring double dragon back to it's glory. Hopefully it will be on a system that isn't hard to get. Peace guys and good work on keeping the forums alive although it seems like it's been hacked

by Billy Lee
As far as the forums getting hacked, I hope that they fix it soon. Arc should do a good job with Double Dragon. It might be time for Double Dragon to receive a complete overhaul in the right way. Games now have much richer stories and deeper game play. If we want a Beat em up feel mixed up updated technology, I think they need to make Double Dragon like Sleeping Dogs in some instances. Sleeping Dogs is the perfect mixture on Beat em Up and Sandbox. Check out this video to see how you like it (NOTE: Yeah I know I brought this up before, but I truly feel it is the direction Double Dragon needs to go with their own personal touch to it of course.):

It gives you a beat em up feel with new features.

by Jetstrange
I was really worried about this new tho becasue of the RIvercity ransom underground game. They never got in contact with them but from one of the people who also backed the Kickstarter for RCRU told me they gave them the go ahead so im good now I really hope they can give us a real awesome double dragon.

by Billy Lee
I have a ton of confidence that Double Dragon won't be a disappointment this time. I do expect major changes though. I see more of a ROTD/anime look in this version with more eccentric characters. I think it will be great.

by cartman
Return of Double Dragon combined with faster action, platforming/background insta-death hazards (jump to somewhere, spiked pits etc, FALLING from a truck or through an elevator), actual differing strength by different enemies and in particular when enemies are obviously introduced as semi-bosses/bosses (Steve, Carlem, McGuire) and an actual story. Even if it's all just reviving an old deal i'd be more than happy.

If it's some blocky, polygone-looking piece of shit with daft looking nuances of grey and brown and exaggerated enemy re-inventions they batter do thing. I'd definately not want anything like those pictures posted!

Maybe the Dojo could try getting in touch with this studio for an exclusive interview about future plans, why not? If they would be open to suggestions something really good could come out of it.
All times are UTC-07:00
Page 1 of 2